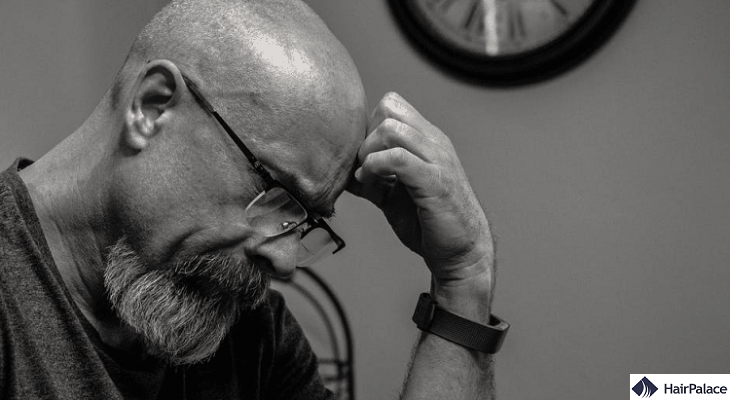 Excess DHT is a common cause of male and female hair loss. But various foods, drinks, and medications can help to inhibit it.

In this comprehensive guide to DHT blockers, we’ll answer the following questions:

What is DHT? What does it do inside the body?

DHT (dihydrotestosterone) is an androgen — a sex hormone contributing to the formation of traditionally male characteristics. However, it’s present in both males and females.

DHT is produced when testosterone is converted by a man’s testes and prostate or a woman’s ovaries. This occurs with assistance from 5-alpha reductase (5-AR), an enzyme.

DHT performs a crucial role in the body’s changes throughout puberty. Typically, boys will develop certain characteristics, including:

For women, DHT is vital for regulating the way in which organs function and synthesising estrogen. This is a hormone class featuring estrone, estriol, and estradiol (which develops traditionally female characteristics and sexual function).

Does DHT affect people differently and why?

DHT’s effect on hair, and the speed with which hair loss occurs, can be affected by genetics.

If your father and grandfather both lost most of their hair to male pattern baldness, it’s likely that you’ll develop the same condition. That means DHT’s gradual miniaturization of scalp follicles will be stronger and faster.

If you have no family history of male pattern baldness or other conditions causing hair loss, excess DHT may not lead to such pronounced shedding.

What happens if you have too much or too little DHT?

Too much DHT can cause certain negative changes to the body and its functions. In males, this can lead to:

But in females, excess DHT could trigger:

Too little DHT at a young age may delay puberty in males and females. However, as DHT is so closely connected to the development of male characteristics and functions, lower DHT levels are less problematic for females.

Males with too little DHT could experience:

And hair loss is another obvious effect of excess DHT.

Why does DHT cause hair loss?

DHT can bind to follicles as it passes through the bloodstream, and gradually shrink them. This will affect the hair’s natural growth cycle, which consists of four stages:

Each strand of hair will rest for a while before the body sheds it and a new hair is created by the follicle. The anagen stage will begin again.

But excess DHT can slow the hair’s reproduction rate by extending the telogen stage or decreasing the length of the anagen stage. New hair will take longer to grow over time. And when it finally appears, it will be thinner and more brittle than before.

Eventually, follicles will stop producing hair. This can cause balding on one or more areas of the scalp.

What are the best natural DHT blockers and how do they work?

Proper nutrition is key to great hair. Adding the following natural DHT blockers to your diet may help in slowing down hair loss. And many of them can be found as an ingredient in topical hair loss treatments too.

Green tea contains epigallocatechin-3 gallate (EGCG). This is a catechin, a type of antioxidant, and is believed to potentially prevent the conversion of testosterone into DHT by inhibiting 5-AR activity.

Bananas are one of the most popular, easily accessible fruits in supermarkets across the UK. And they’re a natural source of biotin: this helps to prevent testosterone from being converted into DHT.

Your favourite part of an egg is the yolk? We’ve got good news — they’re rich in biotin (like bananas). That means a regular helping of egg yolks could contribute to a decrease in your DHT levels over time.

But don’t eat the yolk and ignore the whites: these contain protein — essential for hair growth.

Mangos are delicious, refreshing, and packed with good stuff.

Amongst the vitamins C and E, you’ll also find lycopene in mangos. This is an antioxidant that helps to protect the body from free radicals capable of damaging DNA. Lycopene can also maintain the health and strength of bones, as well as aiding eyesight.

But lycopene could also reduce DHT levels in the body. As part of a healthy diet that includes some of the other natural DHT blockers on this list, mangos might help to combat hair loss.

White mushrooms are easy to find in any supermarket and are versatile enough to suit a plethora of dishes. Add them to spaghetti bolognese. Fry them to accompany your egg and toast at breakfast. The list goes on and on.

But white mushrooms are also a terrific source of zinc, which can block the production of DHT by inhibiting 5-AR activity.

Tomatoes are a wonderful source of lycopene, particularly dark ones.

Cooking, or at least heating, tomatoes is believed to increase the potency of the lycopene too. Not only can this fight DHT, it could also combat cancer.

Pumpkin seeds are easy to scatter on salads or over porridge. And they contain Delta-7 Sterine, a steroid capable of blocking DHT.

This is because it competes with DHT at key sites, including hair follicles. Introducing pumpkin seeds to your diet could gradually prevent DHT from building up in the follicles.

Kale has become known as a superfood for a number of reasons, including:

But kale can also be an effective natural DHT blocker as it’s high in zinc, which helps to prevent testosterone’s conversion into DHT.

Research shows that consuming stinging nettles can help to prevent testosterone from being converted into DHT.

Stinging nettles should be cooked, dried, or made into a supplement for safe human consumption. Their ability to sting will be negated when cooked for several minutes.

Carrots are another great source of lycopene. And you can enjoy them as a snack (with hummus), grated over a salad, or roasted.

How can you reduce DHT with medication? Is it working? Is it safe? Are there any side effects?

DHT blocker tablets are also available on prescription. They are widely used, but as with any medication, they have potential side effects that must be taken into account.

However, certain side effects may occur with finasteride:

Dutasteride is designed to suppress the conversion of testosterone into DHT, for treating enlarged prostates and reducing hair loss.

Like finasteride, dutasteride is an oral medication prescribed for males only. It also carries a risk of challenging side effects, such as:

While these medications may help to reduce DHT levels, their serious side effects can be off-putting.

Another issue is that patients must keep using these drugs to maintain any positive results they achieve. Otherwise, the hair could start to fall out again. That means neither medication is likely to be a long-term solution.

This is just one reason why hair transplants have continued to increase in popularity in the past decade: one treatment is usually enough to achieve natural, lasting hair growth.

It’s best to speak with a hair transplant specialist to discover whether a procedure would be right for you. They’ll examine your hair and scalp to determine if you’re a suitable candidate.

Can DHT blockers be harmful?

DHT blockers can cause a number of side effects, such as erectile dysfunction and ejaculating earlier or later than usual. Patients may also develop excess fat or tenderness in or around the breasts.

Is blocking DHT a good idea?

The main advantage of using DHT blockers is slowing or actually stopping hair loss. It’s often regarded as the most effective hair loss solution as it fights one of the biggest causes of baldness. But DHT blockers don’t encourage new hair to grow directly.

What kills DHT on the scalp?

Finasteride, an oral medication, is the most powerful way to stop DHT. This cuts the amount of DHT produced by the body without eliminating it completely. In some shampoos formulated to block DHT, an antifungal agent — ketoconazole — is the active ingredient.