What is Male Pattern Baldness and Can it be Cured? 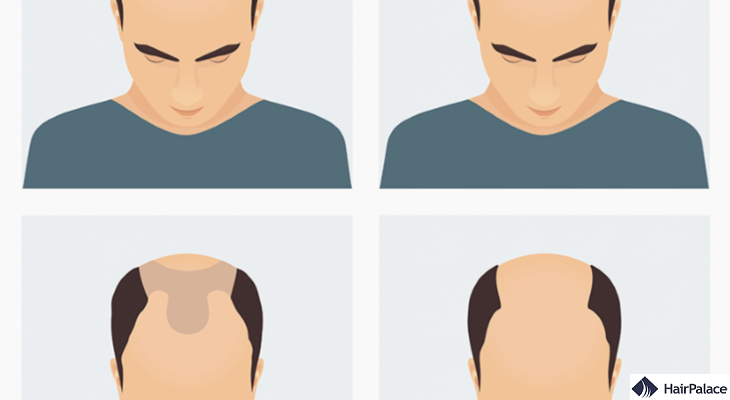 Hair loss is never easy. Millions of men and women experience baldness at one time or another, whether it strikes in their twenties, sixties or even later.

The fallout can be traumatic at any age, especially for people who feel their hair is a key defining trait.

Though hair loss can be attributed to various causes, male pattern baldness is one of the most common.

What is it? And, perhaps most importantly, can it be cured?

Analysing the pattern of baldness

Male pattern baldness (AKA androgenetic alopecia) causes the hair to thin on specific parts of the scalp.

This usually starts on the temples, pushing the hairline back further and further over several years.

Male pattern baldness might trigger thinning hair on the back of the head too, creating the familiar bald spot on the crown.

What causes this condition?

DHT is an androgen responsible for assisting in the development of male characteristics, such as a deeper voice, more body hair and greater muscle mass.

While foetuses form in the mother’s womb, DHT takes a pivotal role in forming the penis and the prostate gland.

A small amount of testosterone is converted into DHT, which is the stronger of the two.

The three stages of hair growth

The effect of testosterone and DHT disrupts the cycle of hair growth. There are three stages within this cycle: anagen, catagen and telogen.

Anagen: Growth occurs during this phase, which tends to last for between two to six years. Hairs form in longer strands the more time they spend in the anagen stage, and the majority of hairs on your scalp are going through it.

Catagen: The hair follicle renews itself throughout the catagen phase, which runs for between 10 days and a couple of weeks. This starts when a signal triggers the end of the anagen phase and ceases the hair’s growth. The hair follicle shrinks to push the hair upward.

Telogen: This is known as the hair follicle’s resting stage. The hair is released and is shed, leaving the follicle to remain inactive for around three months. The entire hair growth process will be then be repeated. All follicles on your scalp act independently and undergo the three phases at different times (to prevent your hairs all shedding at the same time!).

DHT can cling to hair follicle receptors and lead them to shrink, ultimately becoming weak. During this process (known as ‘miniaturization’), all follicles affected by DHT will stop producing hair — the growth cycle will fail to unfold as required and male pattern baldness begins.

This can cause serious self-confidence problems in men, especially if it occurs at a young age, as hair loss is typically linked with older males and seen as a sign of ageing.

Many celebrities have lost their hair to this condition. Jude Law, Wayne Rooney and Jason Gardiner were all photographed sporting receding hairlines at one time or another.

Furthermore, Rooney and Gardner have been vocal about their experience with male pattern baldness and the steps they took to address it.

This has been a powerful aid to men suffering with the condition, and can help to make them feel more comfortable discussing it with others.

Can male pattern baldness be cured?

Finasteride can be consumed as a pill, usually once a day, and a course of treatment typically lasts around two years. It targets DHT, reducing its presence in blood levels and the scalp, by blocking the 5-alpha reducatase enzyme (which converts testosterone into DHT).

Minoxidil is believed to work by dilating blood vessels surrounding hair follicles, boosting the supply of nutrients reaching them and promoting healthy growth.

However, these don’t guarantee the kind of restorative results a lot of men expect and can cause such side effects as skin irritation / dryness, headaches and blurred vision in some cases.

Blocking DHT can lead to further side effects that may have a more potent impact on everyday life. These include:

Reduced sex drive: Blocking DHT may have a negative effect on your libido — there’s only a small chance, but a chance nonetheless.

Weakened erections: Coinciding with the lowered sex drive, erections could be weaker and less frequent due to the reduced amounts of DHT.

Though research is ongoing to find a chemical-based treatment with high success rates, the most effective way to encourage hair growth in men experiencing male pattern baldness is a hair transplant.

Celebrities like Wayne Rooney, Joey Fatone and Jason Gardiner have praised their hair transplant surgery for giving them a more youthful look. The cutting-edge FUE (follicular unit extraction) technique involves extracting healthy follicles from the back and sides of the scalp, before transplanting them into the bald zones.

At HairPalace, our experts use the FUE 2 Safe Scribe process for safe, effective results. This tool allows the surgeon more precision and reduces the chances of any follicular units being damaged during the hair extraction / implantation process. As a result, success rates are higher — leading to more satisfied patients.

The FUE 2 Safe Scribe method is a fantastic solution that can achieve transformative, permanent results.

Men with male pattern baldness can regain their lost hair and enjoy a more youthful appearance thanks to this hair transplant surgery at affordable cost.

This may boost your self-confidence and help you feel more like yourself.

However, men with male pattern baldness are recommended to wait until all hair loss is complete.

If not, subsequent treatments may be required as more thinning occurs.

Wayne Rooney had to undergo multiple transplants as further shedding occurred after his initial procedure.

Do you want to learn more about our FUE surgery or book a consultation?

Please don’t hesitate to get in touch. Our friendly team will answer any questions you may have!