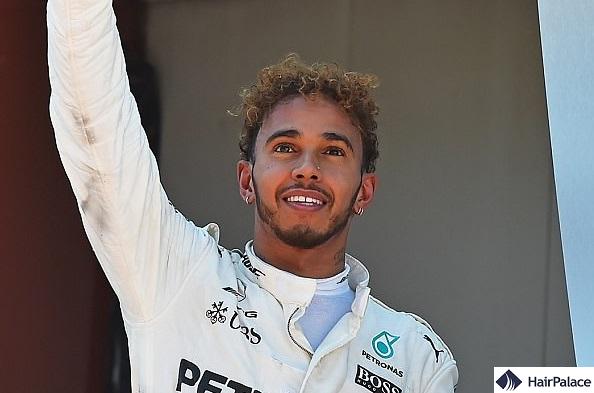 Lewis Hamilton is one of the world’s most successful Formula One drivers. Since he started in 2007, Hamilton has driven for McLaren and Mercedes to great acclaim, and was the youngest driver to become Formula One Champion in 2008.

As Hamilton is such a prominent figure in the exciting world of F1, his personal life is often the subject of close media scrutiny. His relationship with beautiful Pussycat Dolls star Nicole Scherzinger often made headlines due to its on/off nature.

But another common point of discussion are those Lewis Hamilton hair transplant rumours.

Did he actually undergo a hair restoration procedure to bring his hairline back to a more youthful condition?

Let’s explore the Lewis Hamilton hair transplant story to find out if the speculation is true, and provide insights into the treatment he may have chosen.

What did Lewis Hamilton’s hair look like when he was younger?

Lewis Hamilton’s hair has undergone a staggering transformation since he first exploded onto the global racing scene.

Photographs captured in 2007, at the start of Hamilton’s Formula One career, show what appears to be a receding hairline.

And the scalp is clearly visible through his hair, which suggests a lack of density.

In fairness, the hair’s short length and the strong sunlight in the image above add to the scalp’s visibility.

But the photograph below, taken in 2010, shows that Hamilton’s hair appeared to have receded further and become even thinner throughout the intervening years.

Hamilton was also often seen wearing baseball caps during the early phase of his career. Was this a fashion choice or an attempt to hide his hair loss?

Why and when did Lewis Hamilton start to lose his hair?

Lewis Hamilton’s hair loss appears to have started in his early twenties, as the above images show. But why did his hair begin to fall out at such a young age?

Hamilton has kept fairly quiet about his hair growth and the transplant rumours. But he blamed his hair loss on washing his hair with bath soap and “anything [he] had at the time”.

He claimed he would wash it three times per day, which meant it was “always dry”, and never shampooed or conditioned.

Failure to wash the hair with shampoo regularly can cause scalp irritation and even folliculitis (inflammation). The latter may lead to hair loss in some cases.

It’s also possible that Hamilton’s hair loss could result from a family history of baldness. His father, Anthony (pictured below), has a significantly receding hairline.

But photographs of Hamilton sporting longer, denser hair began to appear in the late 2010s.

In 2017, he wore his hair in braids and had been seen with a looser, wavier style — both a far cry from the thinning style seen years earlier at the start of his career.

In 2019, Lewis Hamilton hair transplant rumours made national news after he shared images of his full, thick hair.

But he waved speculation away and attributed his hair growth to washing properly.

He insisted that a specialist told him if he didn’t start to take care of his hair properly, he’d lose it within a “short amount of time”.

However, the change in his hair since the late 2000s to the present day is astounding.

While it’s possible that merely embracing a better haircare regimen and washing with quality products played a part in restoring his hair growth, it’s highly likely that he underwent a hair transplant.

If he did opt for a transplant, it’s possible that this was performed during the 2010s. His success has brought unbelievable wealth, so there’s no question that he could have taken advantage of the most advanced technology available.

Has he ever confirmed the treatment?

Lewis Hamilton has never confirmed that he underwent a hair transplant.

Hamilton claimed that “the right advice” and “good products” had helped to save his locks. He also explained that a lack of him“being educated about it” was partially to blame for the poor condition of his hair.

During FUT, a surgeon removes a strip of flesh from the back of the head and cuts this into grafts comprising multiple follicles.

These are implanted into the thinning/bald area(s) of the scalp, and the wound left by the strip’s removal is closed.

FUT leaves a visible scar on the back of the head that must be covered by long hair, if the patient wants to keep their treatment discreet.

An FUE procedure is minimally invasive. The surgeon removes grafts individually from donor areas, using a micro punch for greater precision. No visible scarring remains in the treatment area.

The cost of FUE treatments varies. Prices at UK hair clinics are typically in excess of £9000 when 6000 hairs are required.

This is the most effective method available, with 95 to 100% of implanted hairs growing back.

Recovery times are shorter than with other techniques, taking just five to seven days in the majority of cases.

When did he start to have hair loss problems?

Lewis Hamilton already appeared to be experiencing hair loss when he made his professional F1 debut in 2007.

Why did he have hair problems?

Lewis Hamilton has blamed his hair loss on washing his hair with bath soap, rather than shampoo, multiple times each day. His father has a clear receding hairline, so the condition could be hereditary.

Lewis Hamilton has denied having a hair transplant. He claims treating his hair better and using quality products led to his impressive hair growth.