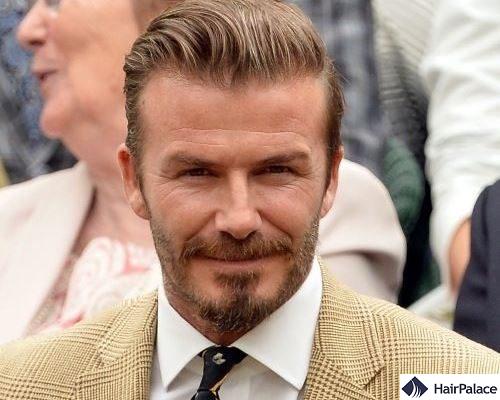 David Beckham is one of the most iconic male celebrities of the past two decades.

Today, we know him for his fashion modelling, cameo appearances in movies, and being part of one of the world’s biggest celebrity couples (with Victoria Beckham, AKA Posh Spice).

However, before all of this, Beckham made a major cultural impact for his presence on the football pitch. His flair with his feet and his good looks helped embed him into the public consciousness — and his stylish hair has always been key to his appeal.

While many of us will remember David Beckham’s flowing block locks in that familiar 90s style, his hair has changed again and again over the years. Glance back at a variety of pictures and you’ll see a fantastic faux hawk, short spikes, a simple crew cut and more.

It’s surprising, then, that celebrity gossip columns and magazines have continued to speculate on the health of his hair growth. Rumours of hair transplant surgery have circulated again and again — but where do they end and the truth begin?

What is the truth of David Beckham’s hair transplant?

Wayne Rooney’s hair transplant surgery could be one catalyst for the rumours surrounding Beckham.

Rooney, of course, has been remarkably frank about his own surgery. The post-procedure change in his physical appearance is astounding, but he was clearly balding from a fairly early age.

In contrast, Beckham’s hair has always appeared thick and healthy, serving as a defining facet of his distinctive style. Though he has showed no signs of hair loss, the subject has surfaced in interviews, but Beckham has shot speculations down in a firm yet polite manner.

Beckham has claimed to have no problem with hair transplant surgery and understands people’s choice to go through with it, but denies having done so himself. He suggested he would prefer to shave his hair off if it started to fall out, rather than opting for surgery.

It’s hard to tell whether he has actually undergone a hair transplant just by looking at pictures, but there’s no reason for him to lie. After all, one would assume that Beckham would make a valuable spokesperson for any clinic that restored his hair, and his honesty could help to inspire many other men affected by hair los to find a solution.As it is, we have to take David Beckham on his word. Still, if he wanted to avoid hair loss as much as possible, what steps could Beckham take?

How to avoid balding

One way to combat hair loss is to adopt a more nutritious diet, filled with crucial vitamins and minerals.

Avoiding stress as much as you possibly can will also help to reduce your risk of hair loss, though this is often easier said than done. Practice meditation, get plenty of exercise (if viable), and spend more time doing things you enjoy. Always be willing to share your worries or frustrations, rather than letting them swell inside you.

A hair transplant surgery is an ideal solution to combat hair loss and restore healthy growth, but it’s vital to wait until all hair loss is complete. Further balding can require multiple procedures, as in the case of Wayne Rooney.

Want to learn more about hair transplant surgery? Please don’t hesitate to get in touch with HairPalace!