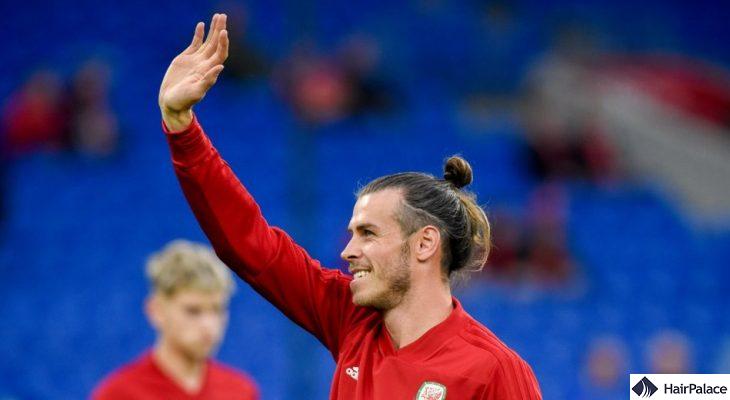 As opposed to celebrities, such as Cold Feet star James Nesbitt, or Made in Chelsea personality Jamie Laing, Bale is yet to discuss his hair loss and potential treatments.

And similarly to other celebs who are less upfront about these issues, the Welsh star’s hair is a source of rampant speculation from fans and the media.

Who is Gareth Bale?

Gareth Bale is a popular footballer from Wales. He made his professional debut at Southampton in 2006 before transferring to Tottenham Hotspur the following year and the legendary Real Madrid in 2013. The footballer also frequently plays for the Welsh national team.

He has racked up some amazing achievements during his career (so far): he achieved a high ranking on ESPN’s list of the most well-known athletes in the world and has been titled Welsh Footballer of the Year on six occasions to date.

His hair loss has sparked much speculation and various rumours in the media. A 2017 Daily Mail article suggested that he had been “stung” when Twitter users discussed his apparent hair loss during the Euro 2016 tournament.

The Daily Star and The Sun also reported on the Gareth Bale balding situation. An undisclosed source was quoted as saying that the star was “fed up” with the bald patch at the crown, and he was keen to get his hair loss “sorted” in the wake of those jibes on social media.

Both publications shared photographs to highlight Bale’s supposedly thinning crown. The image below offers a clear glimpse of what appears to be a bald patch on the head of the Real Madrid star:

So, is Gareth Bale going bald? A large area of his scalp is visible through the gap in his bun, so it’s possible that he has been affected by minor hair loss. But it’s unclear whether or not the thinning is restricted to the top of his head.

Other pictures also show that he has a mature hairline caused by natural recession around the front of his scalp and temples. This is particularly visible with his mane tied back into a man bun.

Bale may be affected by male pattern baldness, the most common type of hair loss in males. This condition is caused by dihydrotestosterone (DHT), a sex hormone responsible for the development of certain male characteristics (e.g., a deep voice and extra body hair).

DHT adheres to the hair follicles and causes them to shrink. Causing hairs to become thinner and take longer to grow — until they stop growing entirely.

Male pattern baldness can take years to affect the entire scalp. It’s possible that he has this condition but has covered it strategically with longer hair (as media speculation suggests). His hair also appears damp with sweat in the above image, which makes it look thinner and sparser.

Did he use his famous man bun to hide his bald patch?

The Sun’s article from March 2017 quoted an anonymous source who claimed that Gareth Bale wore his hair in a fashionable man bun as a way to “cover his bald patch”.

It’s unknown if this is the real reason that the winger grew his hair long. But many men experiencing the early stages of baldness use their remaining hair to cover their scalp, whether with a traditional “comb over” or a high bun like him.

This longer style was a significant departure from his previous choices. The Real Madrid star wore his hair in a variety of shorter styles over the years before settling on his signature man bun look: images from early in his career show him with side-swept hair (see below), a trendy faux hawk, and a more traditional side-part.

Does Gareth Bale have his hair down?

Gareth Bale rarely shows off his hair down. But in 2020, he took off his signature man-bun to reveal he’s got an incredible flowing hairstyle.

Understandably, fans were stunned by how long his hair got above his undercut over the years.

And the photos show not only incredible lenght, but his mane also appears healthy and dense:

Did Gareth Bale consider having a hair transplant?

Gareth Bale has never confirmed nor denied that he has considered a hair transplant (at the time of writing).

However, an anonymous source told The Sun that he was considering a treatment to restore his thinning locks. The source also claimed that Bale had spoken to Joe Ledley, another footballer, about the issue. Reportedly, the Crystal Palace player recommended KSL hair clinics for the procedure.

Gareth Bale hair transplant: Did he have one or not?

Again, Gareth Bale has remained tight-lipped about a possible hair transplant but that hasn’t stopped fans from wondering whether the rumours are true. Fellow footballers like Wayne Rooney and Antonio Conte have transformed their appearance with successful hair restoration procedures.

It’s hard to identify whether or not the football star has had any treatment. However, it’s likely that would choose a Follicular Unit Extraction (FUE) hair transplant if he wanted to try surgery.

What is a FUE transplant?

A FUE hair transplant involves transplanting healthy hair follicles from the back and sides of the scalp into the balding areas. New hairs grow in 12 to 18 months, creating a denser and more youthful look without leaving a scar.

Hair transplants are available at highly competitive prices today, with packages to suit varying degrees of hair loss. The latest technologies and techniques can achieve incredible results that stand the test of time.

Who is suitable for this type of procedure?

The FUE method is the most popular choice among patients and surgeons, as it causes close to zero pain and has a speedy recovery process.

The procedure might be just the thing for you if you’re looking to combat your receding hairline or fill in a bald spot to appear more youthful.

Generally speaking, you might be a good candidate for surgery if you already started to experience a mild recession of your hairline, or you’ve been experiencing hair loss for more than 3 years.

It is important that your hair at the back of the head is sufficiently dense, as this will serve as your donor area. Furthermore, it is advised to let the hair loss stabilize before having the procedure done.

Gareth Bale’s hair looks strong and healthy today, though it’s unclear whether or not he’s had a hair transplant.

His mature hairline is still visible with his hair pulled back from his face: he appears to have a “widow’s peak” or a slight “V” growth pattern. Bale tends to wear his hair in a “man bun”, either for its fashionable aesthetic or to hide his hair loss (as The Sun’s source suggests).

It’s possible that the Gareth Bale balding story will continue if he has male pattern baldness or another condition that causes shedding. And it’s particularly likely if he continues to wear his hair in a tight bun to cover up his bald patch — which can lead to further hair loss or make thinning worse.

Why? Because a tight hairstyle can place unnecessary strain on the hair and may cause traction alopecia.

Bale may choose to undergo a hair transplant in the future to have fuller locks if he continues to show signs of hair loss, such as additional bald spots or further recession at the hairline. But his hair still appears to be in good health at the time of writing, so he may not require treatment for some time.

If you’re concerned about your hair loss, HairPalace can help!

Book your free consultation with one of our hair transplant specialists today!

Other celebrities & soccer stars who had hair transplant surgery

4 Sources
HairPalace relies on scholarly sources, including peer-reviewed articles, as well as publications of medical associations and academic & research institutions. We follow strict sourcing guidelines and avoid tertiary references. Read our editorial policy for further information on how we keep our content up-to-date and accurate.
Free Hair Analysis
Find out in 3 minutes if you are a good candidate for a hair transplant!
Start your free hair analysis!
Recent articles
Contact