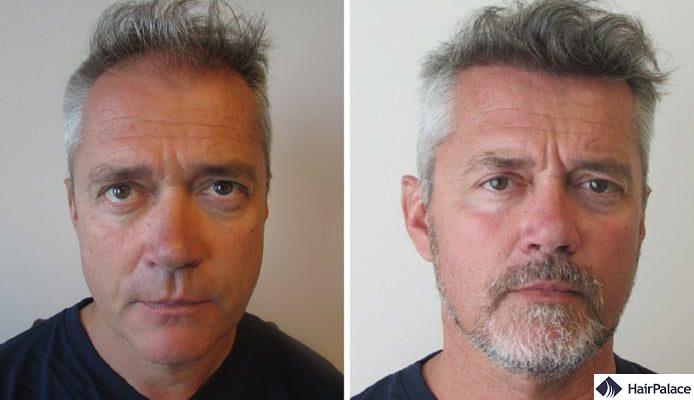 Pascal started noticing hair loss when he was 35 years old.

At such a young age, he was not prepared to go bald: seeing how much the techniques have improved and the convincing results, he decided to go for a surgical hair restoration.

He had his first hair transplant carried out back in 2012; he had around 2000 hairs transplanted with the FUT (or strip) method.

With a FUT hair transplant, the surgeon cuts out a strip of scalp from the donor area at the back of the head. This strip is then dissected into smaller pieces to extract the hairs which are then implanted into the recipient area.

After the FUT, a long linear scar remains on the donor area and it takes around 14 days for the wound to heal.

His hair loss continued to progress after this first treatment. As a result, a few years later he would have preferred more density at the front.

Pascal attended our free hair transplant consultation on the 9th of March 2016. He met one of our doctors who thoroughly checked his condition and discussed his needs:

For the optimal result, we recommended him 6000 to be transplanted with the FUE2 Safe System technique.

With the FUE2, the grafts are harvested one by one, so the procedure doesn’t leave visible scars, and the healing time reduces to 5-7 days.

In total, he had 6316 hairs to build out a dense, defined hairline:

Though the scalp heals quickly after the FUE2 hair transplant, the growth of the new hairs takes time.

We monitor the progress and have check-ups at the key stages of the process.

The first check-up is 7 days after the surgery.

In Pascal’s case, the doctor found everything in order:

There were still some scabs and some redness visible, but the implanted hairs were in place. There were no signs of inflammation or other disorders either:

The next check-up was 3 weeks after the treatment.

Based on the follow-up pictures, the healing progressed well.

The scabs had been soaked off properly, and there was noticeable growth which shows that the implanted hairs could anchor in:

After the 3rd week, the implanted hairs fall out gradually as the roots enter a resting phase.

As a result, by the 3 months’ check-up, the condition looks almost the same as it was before the implantation in most cases.

The implanted area begins to change from the 4th post-op month as more and more hairs start to grow out.

The speed of the progress varies, but by the 6 months mark the change is already noticeable, and some patients might already see a fairly good coverage:

It takes at least 12 months for the implanted area to reach the final result.

In Pascal’s case, we achieved a natural-looking and high density in the frontal zone:

„I am extremely satisfied with the result, I have the impression of having regained my hair almost from before.”

Would you like to find a permanent solution to your thinning hair?