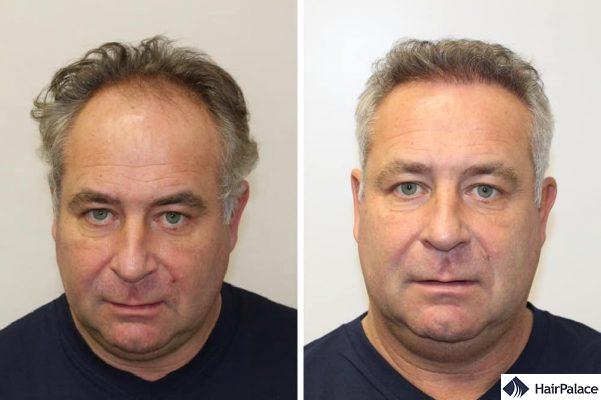 In this post, we will guide you through Franck’s hair transplant, from the first examination until the final result.

Franck registered in our system on the 2nd of October 2017, and he chose to book in for an in-depth examination.

His hair has thinned out at the front and the crown over the years.

Franck explained that though both areas bothered him, his priority would be to restore the hairline.

Upon the examination, his donor area proved to be of excellent quality – it had good density, with thick, strong hair strands.

The doctor readily confirmed that it would allow us to extract even the 6000 hairs without a problem.

The doctor found that to fill up both the front and the crown, Franck would need two hair transplants.

After discussing the hairline he had in mind, the doctor proposed him two possible plans.

The first option was to focus on the hairline only in the first hair transplant session.

In this case, we could implant about 4000 hairs to achieve the hairline Franck was looking for. Then, in a second surgery, we could move on to fill up the crown.

The second option was to extract the maximally possible 6000 hairs in the first surgery and distribute it between the front and the crown.

This way, we could build out the hairline and the front with good density.

Then, with the remaining amount of hairs, we could improve the density at the crown too.

We would not achieve a full density at the crown, but in a second surgery, we could improve the coverage.

After discussing the possibilities, our colleagues informed Franck about what the surgery would involve and about the aftercare too.

The doctor’s recommendation fit Franck’s needs, so just a few days after his appointment, he booked his surgery.

We carried out Franck’s hair transplant with the FUE2 SafeSystem on the 5-6th of January 2018 with 6097 hairs in total.

Five thousand hairs were used to build out the hairline and fill the front with good density.

The remaining 1097 hairs were implanted to increase the density at the crown.

After the extraction we put a bandage on the donor area – you can see a bit of the plaster on the picture above too.

After the surgery, only the extraction site is covered and only for a short period.

It is necessary to take off the bandage in a few hours after the surgery is finished. If it is left on for too long, the bandage can stick into the tiny wounds making its removal more uncomfortable.

The bandage does not have to be replaced, and the donor area will not need any special care.

As the newly implanted hairs need time to anchor, patients cannot cover the implanted area either.

Generally speaking, it is best to leave the scalp to heal on its own in the first period.

Naturally,  after the surgeon goes through the detailed aftercare with them, patients leave the clinic equipped with everything they need to ensure proper healing.

The first 3 weeks after the surgery

For seven days after the surgery, both the donor and the implanted areas must be left as they are.

The scalp cannot be touched, nor washed at all.

Instead, a sterile saline solution must be sprayed on the recipient area every hour.

These practices – combined with the antibiotics, of course – will prevent any infection or inflammation until the tiny wounds close up.

In this picture, we can see Franck’s frontal zone at his 1-week check-up:

The crusts are there, and some swelling can be detected, but the healing was going well.

From the 2nd post-op week, the scalp must be soaked in lukewarm tap water and then massaged daily. As a result, the scabs will disappear gradually, and the scalp will clear up.

From the 3rd week, baby shampoo can be applied to wash the scalp and the hairs gently and carefully.

The recipient area and the newly implanted hairs are rather sensitive in this period.

To make sure that nothing can interfere with the healing process and the hairs anchor properly, there are a couple of rules to follow:

2-3 months after the surgery

After the 3rd post-op week, the hairs will gradually fall out.

This part of the process lasts until the end of the 3rd post-op month when we check the condition again.

At this point, it is common that we see some new hairs here and there, as we did in Franck’s case too:

Some with more sensitive skin might detect a bit of redness on the implanted area, however, it doesn’t take much longer to fade away.

By the 3-months’ mark, the implanted area does not need any special care, and there are no restrictions affecting the everyday routine.

Naturally, harsh chemicals such as synthetic hair dyes, and getting the scalp sunburnt must be avoided still.

4-6 months after the surgery

The growth of the new hairs starts around the 4th post-op month and there is a swift change in the first period.

In just 6 months after the surgery, 50-60% of the implanted hairs grow out.

Remember that at the initial assessment the examining doctor found Franck’s donor hairs to be strong and thick?

1 year after the surgery

After the initial rapid change, the progress will slow down a bit and the remaining hairs grow out by the 12-15th month after the hair transplant.

There can be large individual differences – the age, any medical conditions, and even the lifestyle can affect the speed of the process.

But, in the vast majority of the cases, the result reaches its full impact by the 1-year mark.

Franck contacted us again and we were glad to find out that he is happy with his new look.

The result at the front turned out to be truly excellent; Franck achieved a dense, natural-looking hairline with the FUE2:

As we can see above, while the crown improved as much as expected, the thinning also continued.

He returned to our clinic since and we hope that in a few months he will be just as happy with his crown as he is with the hairline.

Would you like to experience a similarly stunning transformation?

Let us help you restore your hair!

And if you have not registered yet, you can do so below: