What type of hairline do you have?

That may not be a question you’ve been asked before, or even given much thought to, but we all have a specific type of hairline. This can change over time, though, due to genetics, our lifestyle or natural causes (such as ageing).

Whatever its style, your hairline has a major effect on your appearance. And, if it starts to look different, your entire face may begin to look unfamiliar too.

If your hairline has always been a source of frustration or self-confidence issues, or if it no longer looks as you feel it should, what options do you have? 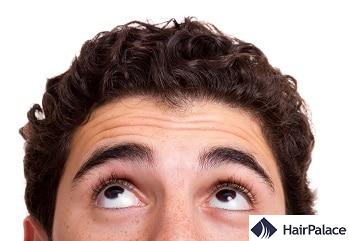 Low hairlines are incredibly common. People with a low hairline appear to have a much smaller forehead than others, and the hair may seem to begin close to the eyebrows.

The hairline can be adjusted by using edgers to trim it a little bit higher up on the forehead. You may also consider waxing, but bear in mind: this is not a permanent solution and you’ll need to stay on top of these processes to maintain results in the long term. 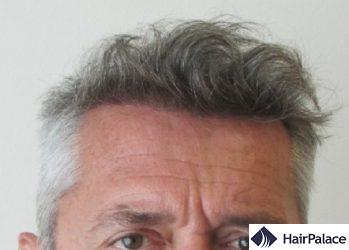 Medium hairlines are generally considered ‘the norm’, though they can start to recede over time too, leading to a higher hairline than before.

In most cases, there is four fingers’ worth of space on a forehead with a medium hairline. 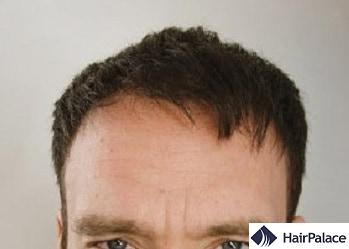 There are different types of high hairlines: those which are natural and those caused by receding hair.

People born with a high hairline can seem to have a larger forehead than others. They may prefer to style their hair in a specific way to minimize the size of their forehead and bring more balance to their facial proportions.

A receding hairline can be caused by genetics (such as Male Pattern Baldness) or other factors (such as certain types of medication, extreme physical trauma, stress etc.). While people who’ve lived with a high hairline for much of their life will no doubt be comfortable with their appearance and have found hairstyles to complement it, those with receding high hairlines can struggle to adapt.

The change in their overall appearance may come as a shock and disrupt their sense of identity. They might try to disguise their receding hairline with hats or a wig, or they could feel indifferent to it altogether.

A ‘mature’ hairline refers to one which moves higher in an even pattern. This may not be a sign of impending baldness, and further receding might not occur. 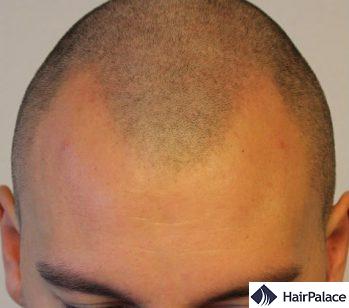 A widow’s peak is a v-shaped hairline that tends to become more prominent as it recedes. Widow’s peaks are very common, and many celebrities have one, including Leonardo DiCaprio, Jude Law, and the mighty Jack Nicholson to name just a few.

Men with highly pronounced widow’s peaks typically sweep their hair back (as with Mr DiCaprio and Mr Nicholson), though various hairstyles can be worn in less-extreme cases.

Whatever your hairline type, you do have options to consider if you want to change its appearance.

Obviously, if you have a medium hairline showing no signs of thinning, it’s likely you’ll be happy with its current state. But if you’ve started to spot early indications of hair loss, or you have a high hairline due to it receding, you could be looking for a solution.

Hair transplant surgery is becoming increasingly common for men who want to transform their hairline. Coping with impending baldness can be tough, especially if you’ve always been proud of your hair. But it’s possible to lower your hairline and stimulate growth, restoring a more youthful, fuller head of hair with a cutting-edge surgical procedure.

While that might sound daunting, it’s actually far simpler and less stressful than you probably imagine. Hair transplant surgery should only be performed by qualified, experienced surgeons with the proper equipment.

At HairPalace, our specialists use the FUE2 SafeScribe tool to perform safe hair transplants with permanent results. This involves taking healthy hair follicles from donor areas of the scalp and transplanting them to zones where hair-loss occurs, however many or few there may be.

This is a simpler, safer option than FUT (Follicular Unit Transplantation), in which a strip of the scalp is removed for grafting. FUT leaves visible scars and limits the freedom of hairstyles you can choose if you want to keep your surgery discrete.

The FUE2 SafeScribe allows surgeons to be more precise when removing donor follicles to be transplanted, minimizing the risk of their becoming damaged and increasing the effectiveness of the procedure. This is a major relief for anyone whose hair has started to recede or fall out in large quantities.

If your hairline has continued to creep further and further back, a hair transplant will return it to a position you prefer. But it’s vital you wait until your hair loss has run its course: undergoing surgery while baldness is still occurring means you may end up needing to have further treatments.

Not only does this equate to more upheaval to your schedule, but additional expense. That’s why it’s so important to make sure your hair loss is complete before you invest in your surgery.

Our hair transplant surgery creates natural results, as all hairs used are your own and blend in with existing ones perfectly. And as the FUE2 SafeScribe is so precise and safe, you don’t need to worry about having scars on your scalp in the future — so you can choose any hairstyle you like once growth is complete.

Your hairline may be lower or higher than you like. There are solutions to either problem, no matter how much work you feel is necessary to get your hair exactly as you want it.

HairPalace’s surgeons have the training, experience and innovative equipment to restore your hairline at a cost you can afford. Our packages are much more competitively-priced than those currently available in the UK, even though our Hungarian specialists perform to the same exceptional standard.

Want to know more? Looking to make an appointment for your consultation in a city close to you? Just get in touch for a free quote now!