As hair transplant surgery offers a permanent result, it makes it possible to rebuild the density of the hair in a day.

But we see many cases when one session is simply not enough to achieve or maintain the best result.

It can happen that fully restoring the thinned out area requires more hair than we could safely extract in one procedure.

Or, the natural hair loss can progress leaving the patient with a different problem area behind the newly implanted part.

In both of these cases, a second hair transplant – or more – is necessary over the years to achieve optimal results.

He had three surgeries carried out at HairPalace clinic over the years to achieve the look on the picture above.

David first contacted us in February 2015 and attended a personal consultation in London on the 17th of February.

He explained why he decided to opt for hair transplantation as follows:

“I had been losing my hair since my early twenties and had been bothering me for some time. As the cost of surgery was (and still is) prohibitive in the UK, I thought the only option was to shave my head and live with it. However, I was excited to discover the cost of surgery in Hungary at Hair Palace was a fraction of that on the UK.”

After receiving the treatment plan detailing the doctors’ recommendation and the price, he reserved his surgery for April in a couple of days.

David’s goal was to restore his original hairline and to increase the density in the middle and crown areas as well.

The surgeon built out David’s hairline and the frontal zone, and implanted a smaller number of hairs to the mid part of his scalp and the crown area as well: 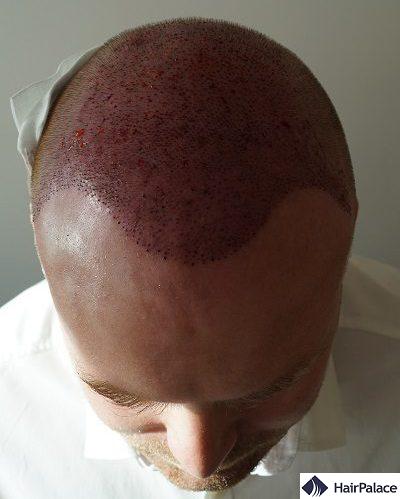 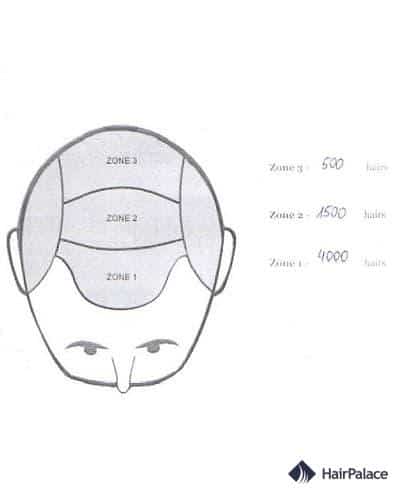 As the 6000 hairs were distributed over a relatively large area, the first procedure resulted in an even density all over the top:

Since the first session proved to be a good base, David decided for a second FUE2 procedure.

This time the goal was to increase the density within the hairline. Thus, the surgeon distributed the hairs over the three zones again, focusing on the frontal and crown areas: 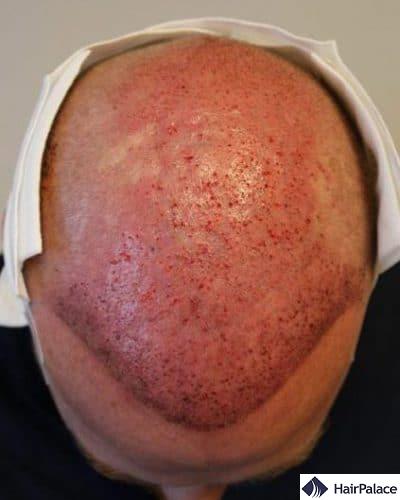 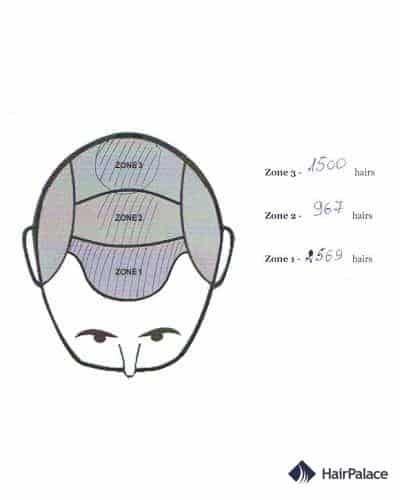 12 months later we saw the final result of his second procedure.

Throughout the months the density significantly improved, but full coverage was not achieved at the crown: 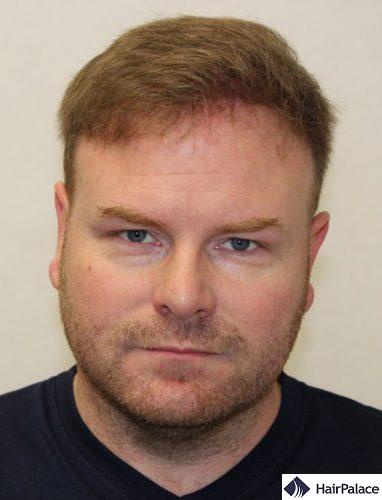 Result 1 year after the 2nd surgery 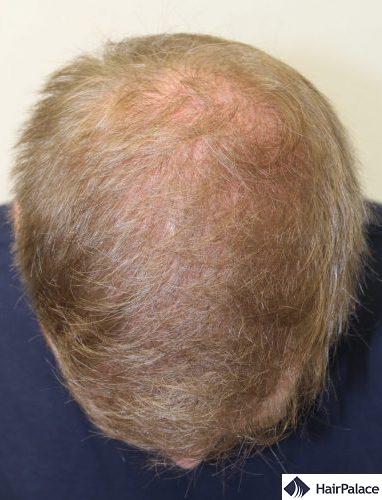 Result 1 year after the 2nd surgery

As David would have preferred an even bigger density, he decided to go for a 3rd procedure on the 14-15th of November 2017.

His donor area allowed the extraction of 4204 hairs  this time. The doctor distributed the hairs between the crown and the front-mid section: 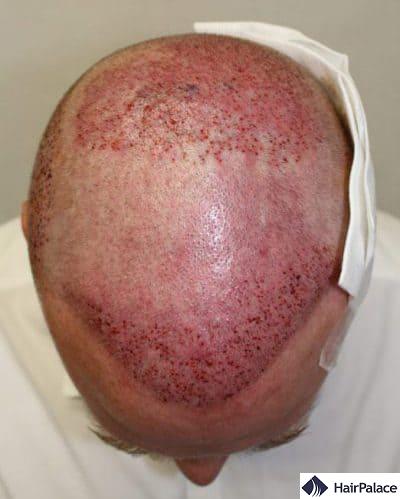 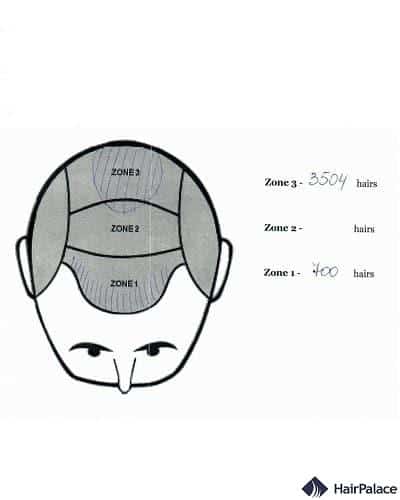 12 months later we were happy to see David with a full head of hair.

In total he had 15 240 hairs transplanted over the years: 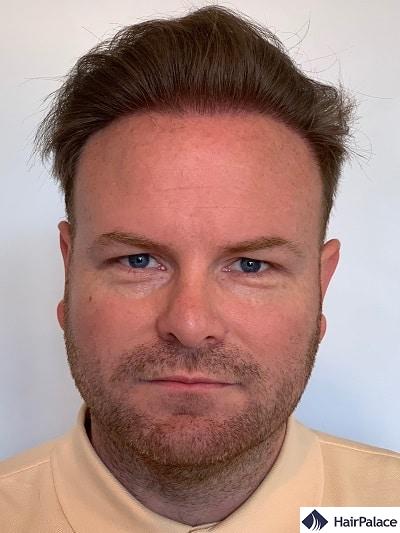 Result 1 year after the 3rd surgery 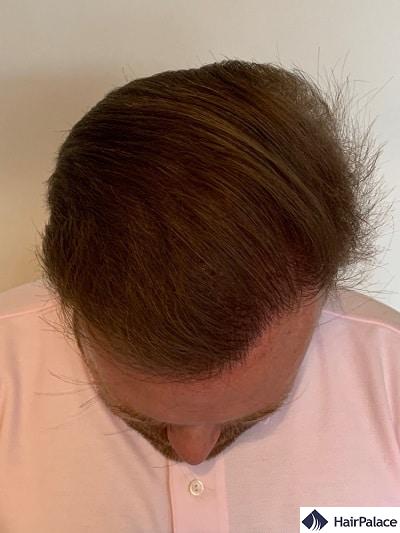 Result 1 year after the 3rd surgery

“I have now had a total of 3 visits to Hair Palace who have been absolutely fantastic and both the staff and facility are second to none. I am so happy with my results and could never have expected them to be this great. It has given loads more confidence. To anyone that is considering a hair transplant at Hair Palace, I would say ‘go for it!’, as I would do it again in a heartbeat.”

The donor area is considered to be a “treasure”.

It is because in each case it allows the extraction of a limited number of hairs over the lifetime.

As the extracted hairs do not grow back on the donor area, each extraction will lower its density.

One of the advantages of the FUE2 procedure is that it does not leave visible scars on the donor area.

In addition, the doctors harvest the hairs evenly, from the whole expanse of the donor area. This way the surgery will not leave any thinner patches at the back and on the sides. 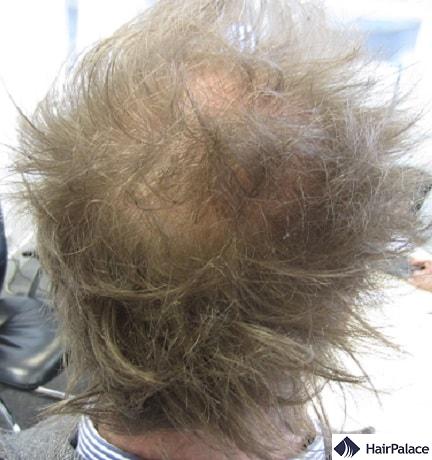 Donor area before the hair transplants 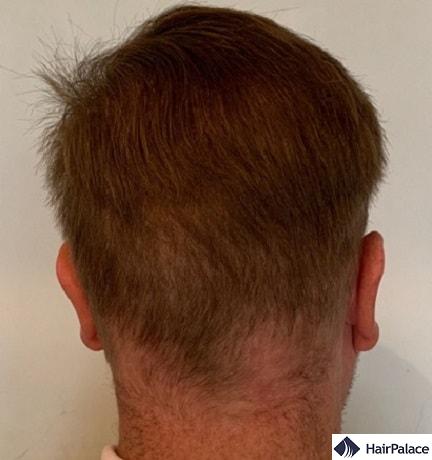 However, each case is unique and the options for repeated procedures are always determined by the donor area.

As the FUE2 SafeSystem offers a 90-95% success rate, it allows achieving a natural-looking, dense result, while preserving the donor area for future procedures.

Would you like to look into the mirror with dense hair, and filled with confidence again?

Contact our colleagues on +44 207 131 0229  and reserve your spot for the digital density examination in the UK, or check the available surgery days!

You can sing up below if you have not registered yet: