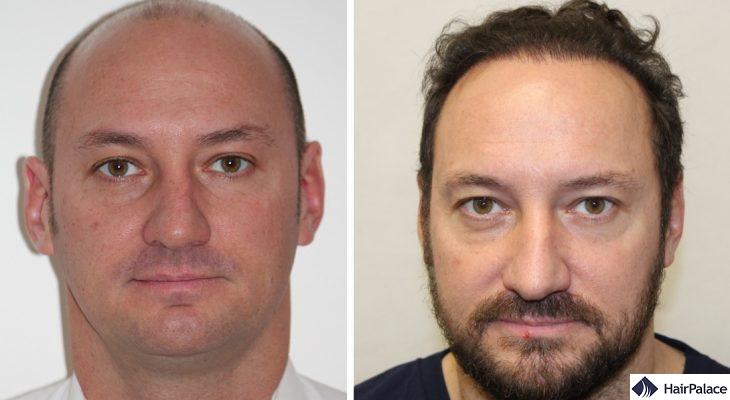 Xavier is one of our returning patients; he had multiple surgeries at our clinic.

In this post, we would like to show you how he achieved the result you can see above!

Xavier’s hair loss started when he was 18-20 years old, and over the years he lost much of the density at the top.

He kept his hair short for years; while he was interested in the options for hair restoration, the unnatural looking results of earlier hair transplant techniques kept him from going ahead.

Xavier sent his photos via e-mail so we can assess his condition and make him a quote:

From the pictures, it became evident that his hair loss affected the whole top part of the scalp.

In these cases, it is not possible to cover the top with a single hair transplant. However, if the donor area allows, a good density can be achieved all over the scalp with multiple sessions.

In such cases, we recommend starting with the hairline and to proceed gradually towards the back.

This way, growing the hair longer and combing it back, the patient can get coverage on an area larger than the implanted section.

Furthermore, the patient will see the new hairline in the mirror every day, and the change will surely catch the eye of others too.

And the visible result can be motivating for patients during a multi-stage, time-consuming process.

We have recommended this course of action for Xavier too, who agreed with the doctors.

We carried out Xavier’s first hair transplant on the 20-21st of June 2016, with the FUE2 technique.

It was safe to extract 5300 hairs from his donor area that was used to build out the hairline:

After the procedure patients can travel home, but they must follow the doctors’ post-op instructions.

It is important to avoid strong sunlight and physical extertion, and it is not allowed to cover the head.

1 week after the surgery the implanted area is well defined. There is still a bit of redness, and some scabs.

In the next couple days, weeks, as the scalp heals, the traces of the surgery disappear completely.

In almost all of the cases, these processes develop more or less differently.

For example, for someone with fair, more sensitive skin, it might take longer for the redness to fade away. And while some might experience hair fall 17-19 days after the surgery, in some cases the implanted hairs fall out in a minimal number.

There could be small differences detected in Xavier’s case too. At his 3 months’ check-up quite a lot hairs could be seen on the implanted area:

However, the truly remarkable change happens only in the next months.

The new hairs grow out gradually and the density increases month by month.

6 months after the surgery roughly half of the final result is visible.

The growth period ends around 12-15 months after the hair transplant.

Preparing for his next surgery Xavier chose a shorter hairstyle. But thanks to this, we can see the result achieved with the first surgery precisely:

We carried out Xavier’s second implantation on the 10-11th of October 2017.

With another 5000 hairs we could continue building up the density behind the previously implanted area.

In this picture, you can take a look at the newly implanted zone in the middle of the scalp:

The healing process goes all the same after the second surgery.

In the first 3 weeks, patients must take care of the implanted area, and they have to gently soak the scabs off.

In the following period the newly transplanted hairs fall out, and after the 3rd post-op month the density starts to improve gradually.

In Xavier’s case some change was already noticeable at the 3 months’ check-up.

However, the real transformation of the implanted area starts from the 4th post-op month.

Month by month, new hairs grow out – as a result the density improves gradually.

Half a year after the surgery we can talk about a striking change.

Take a look at Xavier’s hair transplant result we have achieved:

Xavier returned for a 3rd session to implant hairs to the crown and we hope to show you the result soon!