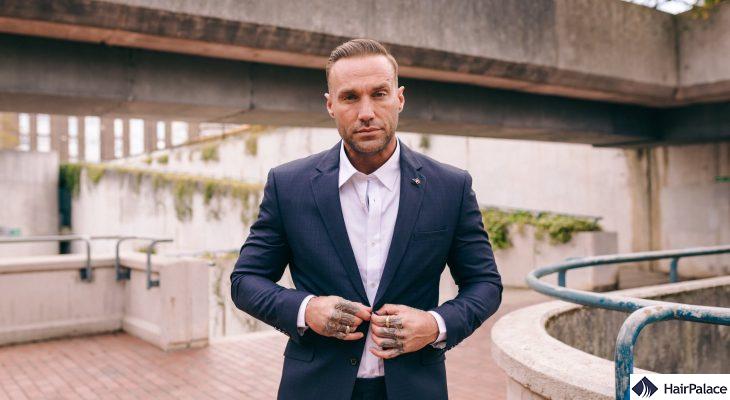 Calum Best has made headlines many times in the past 15 years, whether for his dalliances with a string of beautiful celebrities, his stints on popular reality shows, or his impressive hair transformations.

Along with stars like Elton John, James Nesbitt, and Wayne Rooney, Calum Best has been open about his struggles with hair loss — and the transplants that helped restore it.

But how many treatments has he tried? And how have they changed his hair for the better?

In this post, we’ll explore the fascinating Calum Best hair transplant journey, with details on each treatment and helpful advice if YOU want to try a hair transplant.

Who is Calum Best?

Calum Best is the son of famed footballer George Best, who passed away in 2005, and Angie Best, a former model.

Best rose to stardom following his appearances on a range of reality series. In 2005, he joined Jayne Middlemiss, Rebecca Loos, Abi Titmuss, and several other celebrities on the first series of Celebrity Love Island.

The following year, Best returned for the second series, and was crowned the winner alongside Bianca Gascoigne (adopted daughter of footballer Paul Gascoigne).

Soon, Best became a regular fixture on television. He appeared as himself in the final episode of the racy ITV drama Footballers’ Wives, and took part in a road trip across the States with Fran Cosgrave and Paul Danan in Calum, Fran, and Dangerous Danan.

Best has also launched fragrances, participated in Celebrity Big Brother twice, cooked for fellow stars on Come Dine With Me, and searched for love in Celebs Go Dating for E4.

A key part of Calum Best’s appeal has always been his looks, and his spiky hair was one of his most distinguishing features during his early television appearances. However, his hairline had clearly started to recede by the time he reached his mid-twenties, and the recession became more pronounced over time.

While his father always had a strong head of hair, it’s possible that Best inherited the trait from another relative on his paternal or maternal side. However, Best has blamed his hair loss on repeated bleaching and wearing tight ponytails.

Why did Calum Best choose to have a hair transplant?

Calum Best has discussed his hair transplants openly. In a Daily Star article from 2017, Best explained his decision to undergo treatment because “no man wants to be bald when he is older”.

He continued: “Losing your hair is one of the most demoralising things that can happen to a man as he ages. You don’t feel nearly as good about yourself and it eats away at your confidence.”

Best claimed that he wanted to “get it done before going on Celebrity Big Brother” so his hair would “look great” on the show.

Best is, of course, in an industry that places huge importance on aesthetics. Granted, a great many men have achieved remarkable screen success without a full head of hair — Patrick Stewart, Vin Diesel, and Dwayne Johnson are just three terrific examples.

But some men clearly struggle with their hair loss and feel self-conscious about the way in which it affects their appearance. James Nesbitt, for example, has shared how he believes his hair transplant had a positive impact on his career and helped him win more lead roles.

Like Nesbitt and so many other men, Calum Best turned to hair transplants because he wanted to feel more confident and satisfied with his looks.

How many hair transplants did Calum Best have?

The Calum Best hair transplant story includes three treatments (at the time of writing), all of which took place at the same Manchester-based hair clinic:

When Calum Best had his first hair transplant in 2012, he claimed that he was “fed up” of losing his hair and “wanted to look good”. This Follicular Unit Extraction (FUE) procedure involved implanting 1,850 hairs into the balding areas of his scalp.

His surgeon removed donor follicles from the back and/or sides of the scalp using a handheld tool, then prepared them for implantation.

However, Best continued to shed hair after this procedure.

Calum Best underwent his second FUE hair transplant in 2014. More than 2,220 hairs were relocated from the sides of his scalp to the top to restore his hairline. He said: “I had the second procedure because I was so pleased with the first one and how it helped to boost my confidence and work opportunities”.

As the image on the right shows, the results of this follow-up treatment were fantastic: combined with his neat beard, the fuller hair gives Best a rugged, fashionable look.

Calum Best returned to his preferred hair clinic again in 2015 for his third FUE hair transplant.

He said he believed he would have lost the majority of hair at the front of his scalp without the surgery, and that hair transplant technology had advanced so much that he could wear his hair as he had when he was in his teens.

And best has said that he’d be willing to have a fourth procedure in the future — though he hoped that would be unnecessary.

However, many men experience lasting hair restoration following a transplant with no need for follow-up treatments to stimulate new growth.

Patients usually only require multiple transplants if their hair loss continues due to pattern baldness, illness, medical conditions, or medication.

It’s recommended that any hair loss be allowed to essentially run its course before trying a hair transplant, though that might not be a viable option for patients who want to address their hair loss as soon as possible.

Calum Best’s hair transplants were performed via FUE rather than FUT (Follicular Unit Transplantation): the latter is a more invasive treatment known to leave a visible scar on the back of the head. This can limit the amount of flexibility the patient has when choosing their hair cut, as the scar will be particularly noticeable with shorter styles.

FUE leaves the back of the head free of visible scarring and enables patients to wear their hair as short as they want to. FUE also leads to hair growth that looks natural and blends with the surrounding hair seamlessly. Surgeons take great care to match hair colour and texture to achieve the best, most authentic results.

Was he satisfied with the outcome of the surgeries?

Calum Best has been satisfied with each of his hair transplants. After his first in 2012, he announced that he was “so pleased” he had it done, and hoped that having a full head of hair would help him find someone “special”.

Best also praised the results of his second hair transplant surgery in 2014: “[o]nce again, I have a much fuller hairline and the whole front of my scalp looks so much better.” He said the operation had provided him with “a lot more flexibility” with his hair, so he could “continue to wear it spiked up”.

And in 2015, Best said that he felt his hair transplant had taken years off him: “I would say keeping hold of my hair has made me look at least five years younger”. He also claimed that the difference in his self-esteem was “immeasurable”.

How much did each Calum Best hair transplant cost?

According to the Daily Mail, Calum Best has paid for three £6,000 hair transplants to restore his hairline.

This may or may not be the exact amount, depending on the pricing structure at his chosen clinic. On average, a hair transplant priced at around £6,000 in the UK would involve 4,000 hairs, though the Daily Mail reported that Best had approximately 2,200 hairs transplanted.

Still, rates vary from clinic to clinic, so anyone considering a hair transplant should understand that they may be able to get the same procedure as Calum Best for a more competitive price.

For example, hair transplants are available at significantly lower rates in Hungary — a 2,000-hair treatment may cost as little as £1,390 at a Budapest hair clinic. This is due to Hungary’s lower living expenses and salaries.

Patients can make substantial savings by choosing a reputable hair clinic outside the UK, while still having access to experienced surgeons and cutting-edge facilities.

Package prices are provided during consultations with hair transplant surgeons. A tailored treatment plan will be created for you, based on your unique hair restoration requirements and goals. You’ll know the full cost of your treatment from the start, so you can relax and focus on the results.

If you want to speak to one of HairPalace’s experts to find out how we can restore your hair, book your FREE evaluation now.