Norwood scale: how can you classify your baldness? 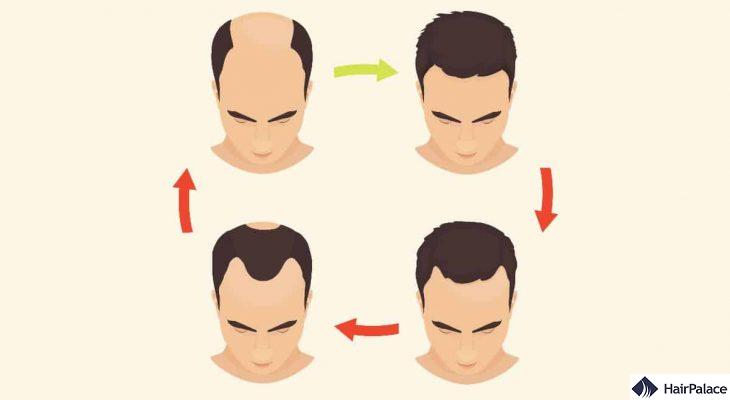 And that’s because this condition is the most common form of baldness in men, responsible for around 95 percent of male hair loss. 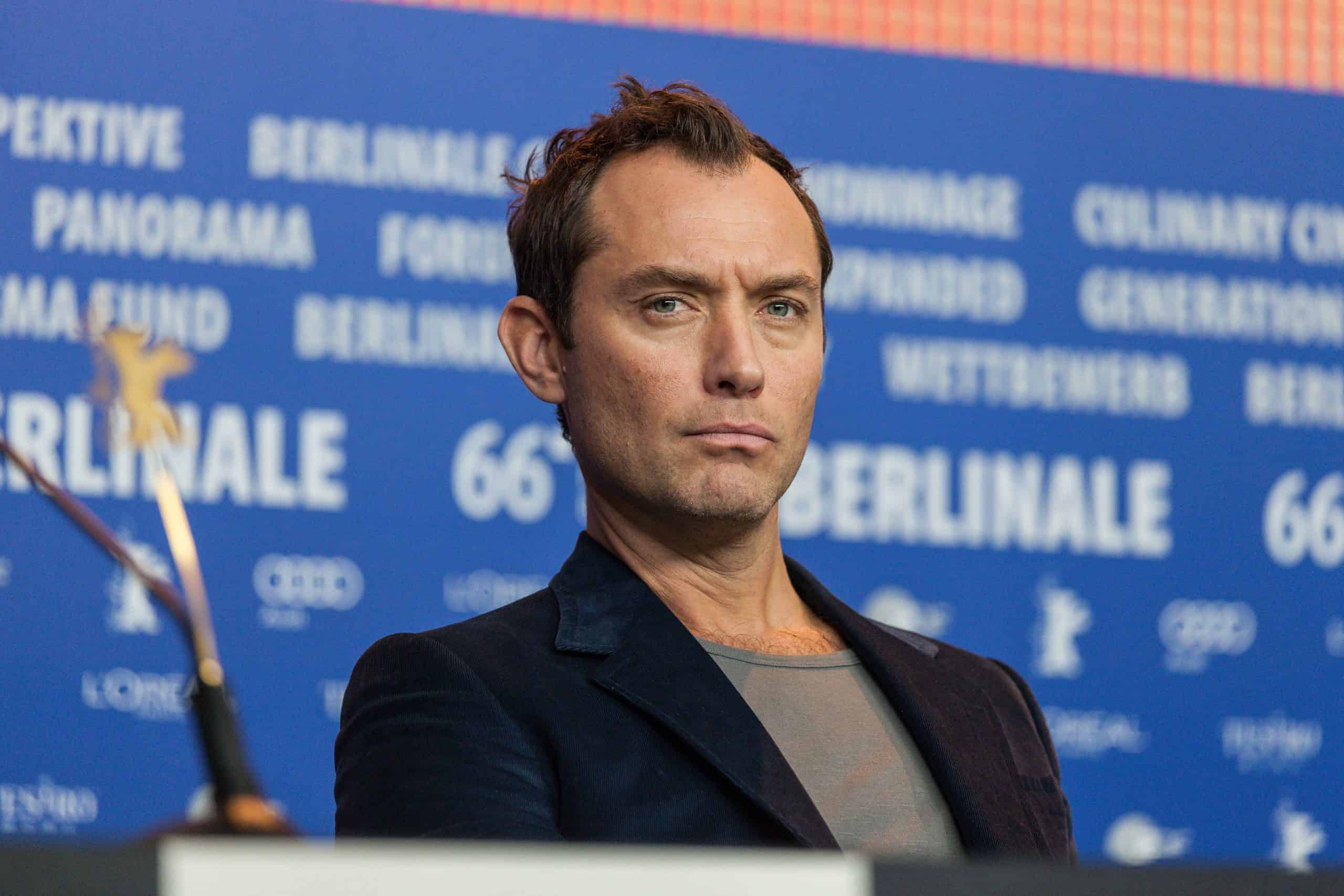 And you can measure the extent of your male pattern baldness with the classic Norwood scale. This will help you determine how your hairline may continue to change over time, and to understand what treatments could work for you.

What is the Norwood scale?

James Hamilton created the Norwood scale in the early 1950s, based on extensive research into male pattern baldness. He monitored the progression of hair loss in more than 300 men, and charted a common progression in the condition.

O’Tar Norwood later revised and updated the scale in the ‘70s, which is why it’s sometimes referred to as the Hamilton-Norwood or Norwood-Hamilton scale.

They can show patients a clear overview of their hair loss, indicate the level of baldness they’re likely to develop in the future, and discuss possible treatments.

What are the seven stages of baldness in the Norwood scale?

There are seven stages of baldness in the Norwood scale. They chart the full progression of male pattern baldness, from initial recession to extreme hair loss across most of the scalp. 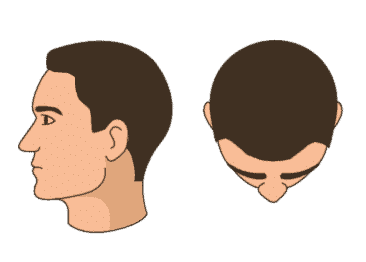 The first stage in the Norwood scale shows no significant hairline recession or hair loss anywhere on the scalp.

Men classified as being at this stage may or may not experience baldness later in life. You should be able to tell if you’re at stage 1 by checking your hair and scalp in the mirror. 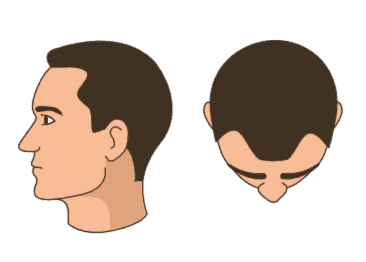 The second stage of the Norwood scale indicates subtle hair loss, which may or may not progress to more severe male pattern baldness.

This hair shedding occurs around the temples, and can create an ‘M’ shape in the hairline (or a ‘V’ in men with a widow’s peak). This is known as a mature hairline.

Actor Leonardo DiCaprio has a pronounced mature hairline, for example: 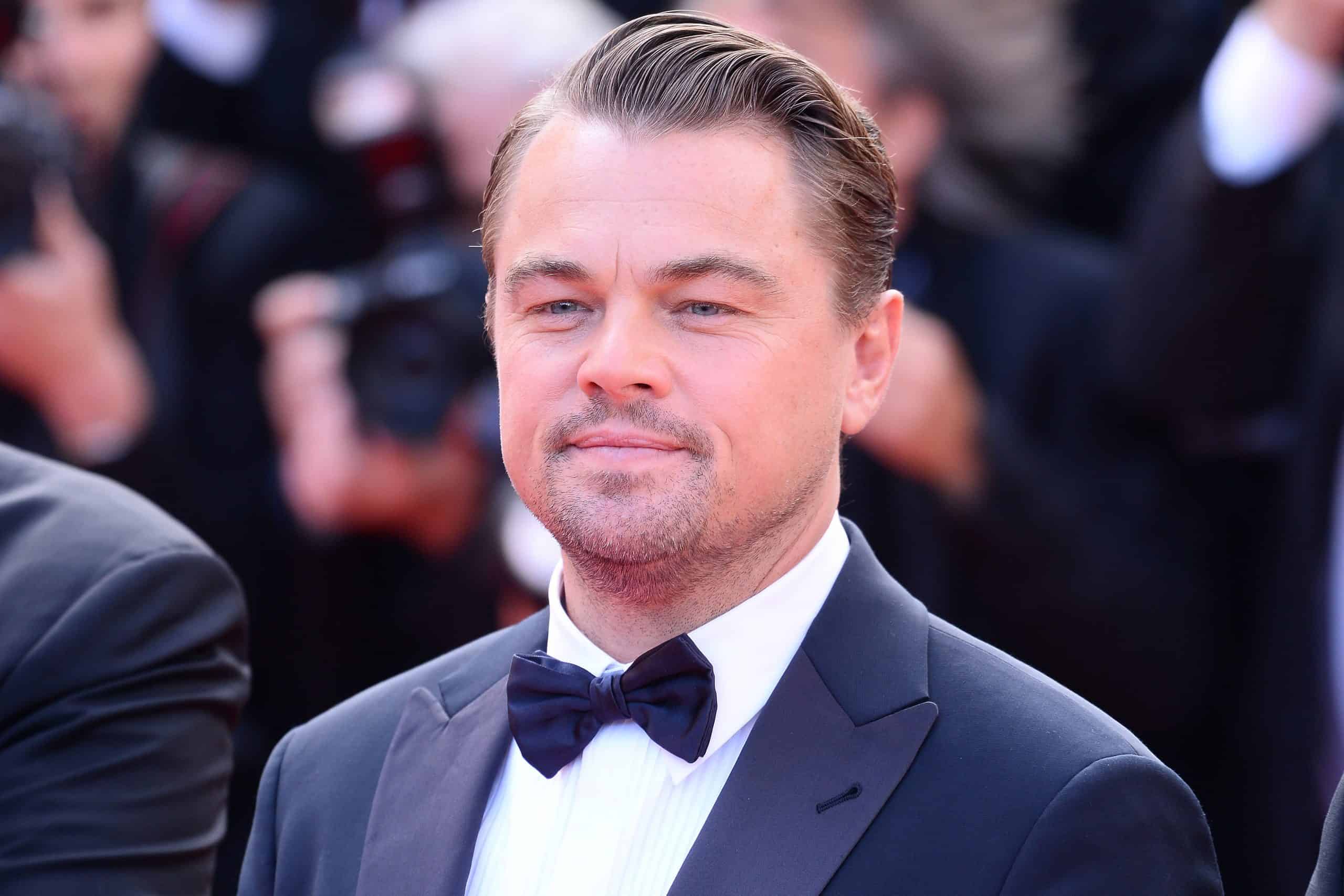 Men may start to develop a mature hairline in their late teens, throughout their twenties, and beyond. But some may keep their youthful hairline for many years after.

Your hair loss might go unnoticed at stage 2, and you could minimise its visibility by adjusting your hairstyle to cover the shedding around the temples. 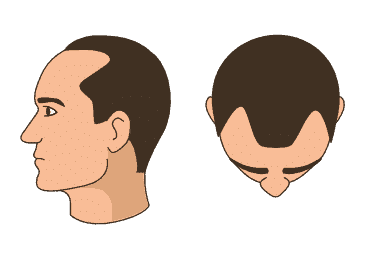 Men at stage 3 on the Norwood scale have more pronounced hair loss around the temples, and the hairline will recess further along the scalp.

However, there’s also a sub-stage, known as stage three vertex. This applies to a bald patch forming on the crown of the scalp while the front remains in stage 2 or 3.

Hair loss may be harder to cover in this case. 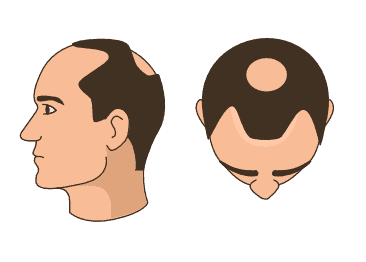 By the time a man reaches stage 4 on the Norwood scale, the hairline recession is significantly more visible. This typically includes baldness at the front and on the vertex.

The hair between both affected areas may still be as dense as before. You might start to consider hair treatment at this point, though it’s important that you consult a specialist before you make plans.

You may not be a suitable candidate if your hair is likely to keep shedding. 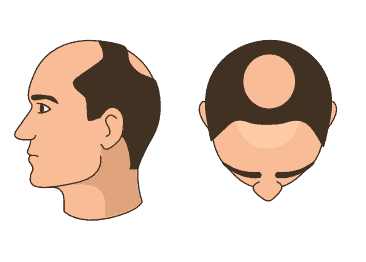 At the fifth stage on the Norwood scale, your hairline has receded around halfway along the scalp. The bald patch on the vertex/crown is also bigger.

You may develop an island of hair at the front of the scalp, separated from the rest of the hair or connected by a thin strip.

Men at this stage could choose to leave their hair as it is, or cut it close to the scalp to create a more cohesive look. 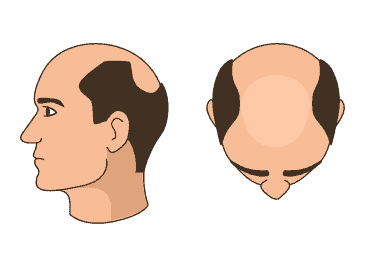 For men at stage 6 on the Norwood scale, hair loss has affected most of the scalp. The bald vertex patch and the receding hairline will almost join, separated only by a narrow strip of hair.

If you had an island of hair near the front of your scalp in previous stages, this may have been shed too. 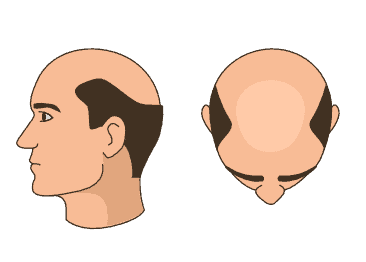 Stage 7 is the most advanced stage of hair loss on the Norwood scale. You’ll usually have just a thin band of hair around the scalp, while the hair on the lower back and sides of the head will be unaffected.

Again, men at this stage may shave their head to be completely bald, wear a hairpiece, or seek treatment at a hair clinic.

When should you see a hair loss specialist?

You should see a hair loss specialist when you start to feel concerned about your receding hairline or thinning at the vertex.

There’s no real need to see a specialist at the first two stages on the Norwood scale. Slight hair loss will create a mature hairline, but there’s no guarantee that you’ll develop male pattern baldness later on.

However, it is a possibility if other men in your family have experienced the condition. In this case, a hair loss specialist may tell you to be on the lookout for further signs of shedding and invite you to return to their clinic at a later date.

Certain medical conditions are known to trigger hair loss, such as:

However, specialists will usually find male pattern baldness easy to diagnose and quickly rule out other possible causes.

How is male pattern baldness diagnosed?

A hair loss specialist or a dermatologist will be able to diagnose male pattern baldness by examining your scalp, usually under magnification.

They will look for common signs of the condition, such as a receding hairline and/or thinning on the crown.

An expert will also discuss your medical background, and ask about hair loss within your family. As male pattern baldness is hereditary, this can be one of the fastest ways to reach an accurate diagnosis.

When diagnosing male pattern baldness, a specialist will consult the Norwood scale to determine the extent of hair loss you’ve experienced so far, and to indicate how it may continue.

How can baldness be treated?

Baldness can be treated in a number of ways. Some are temporary, others are permanent.

Minoxidil and finasteride are two of the most common hair loss treatments.

However, if they actually stimulate hair growth in affected areas, you must continue using them to retain the results.

This means either applying topical minoxidil to your scalp or ingesting a pill for the rest of your life.

Alternatively, a hair transplant is a more effective, convenient, and permanent option.

FUE is the more advanced of the two. This is a minimally invasive treatment capable of restoring hair growth across the scalp with incredible precision. 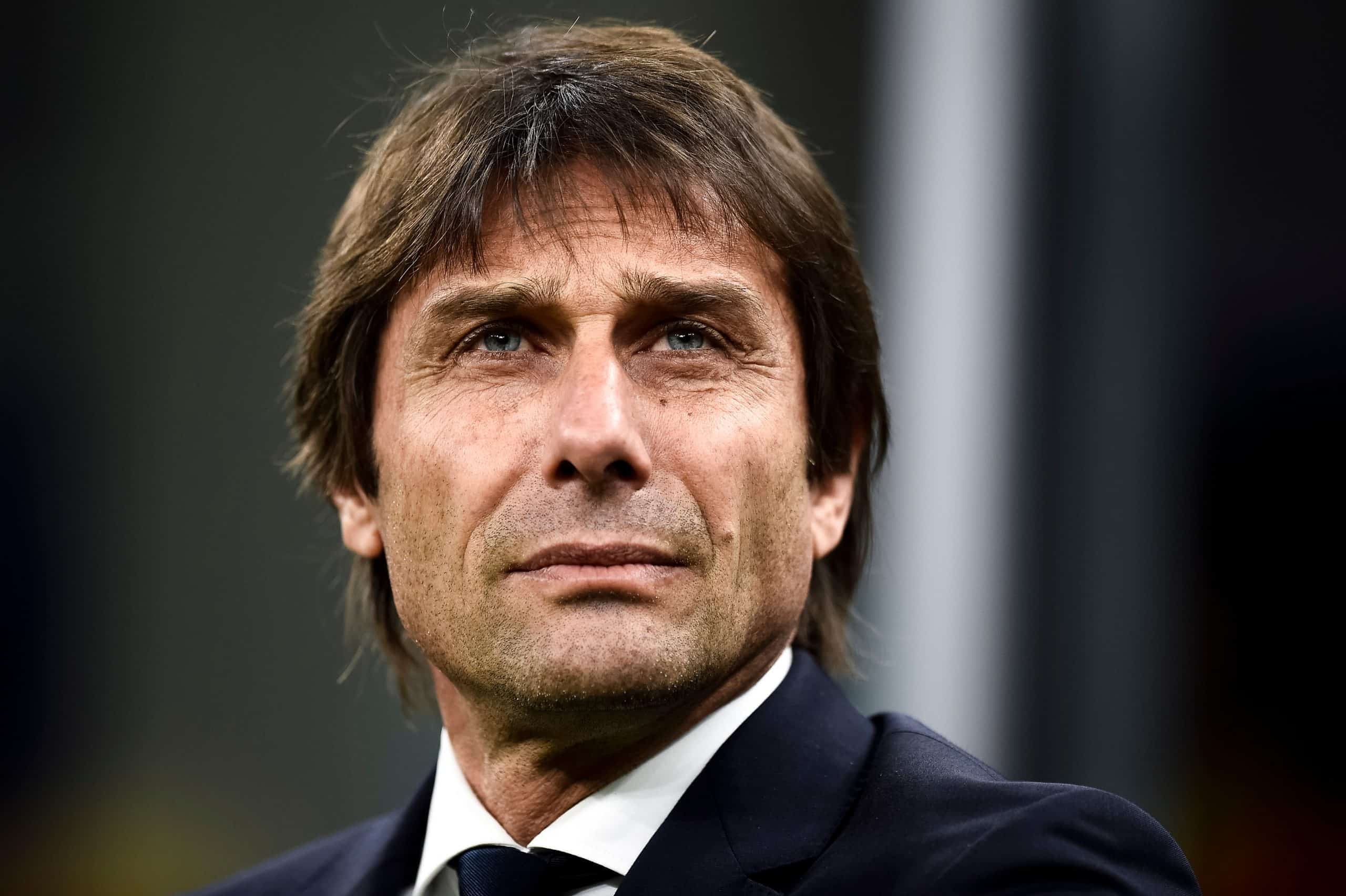 You can learn more about the latest hair transplant procedures here.

Is it possible to have a successful hair transplant at the later stages of the Norwood scale?

You can have a hair transplant at any stage of the Norwood scale, even the later ones, if you have healthy hair around the back and sides of your head.

Why? Because a surgeon will extract hair follicles from these areas and implant them into those parts of the scalp affected by baldness.

In the case of a cutting-edge FUE2 SafeSystem procedure, this process will involve removing and implanting them with a high-precision micro punch device.

You can see multiple examples of FUE2’s remarkable results below:

However, it’s possible that your hair loss will continue even after a transplant — unless you wait for your male pattern baldness to “run its course”.

This can be a difficult decision to make, but allowing your hair to shed across the entire scalp will reduce the need to undergo subsequent procedures in future.

If you think a hair transplant is the right option for you, book a consultation with an expert. They’ll take the time to examine your hair loss, and help you make an informed decision about your treatment.

To learn more, contact HairPalace for a free quote.

What is the scale good for?

The Norwood scale is designed as a simple visual guide to the different stages of male pattern baldness. Hair specialists and doctors can refer to this when examining a patient’s hair loss.

How many stages does it have?

The Norwood scale includes seven stages, ranging from a full hairline to baldness across the scalp.

How is baldness diagnosed?

To diagnose male pattern baldness, a specialist will discuss changes to your hairline, your medical history, baldness within your family, and consult the Norwood scale.